When I was preggers with J, I was more aware than ever before about what I put into my body – but buying organic isn’t cheap in this town! I did my best – and tried to go the organic route more often than not.

If, like many of us, you can’t buy 100% organic 100% of the time, one solution is to focus on the foods that come with the heaviest burden of pesticides. In fact, according to the Environmental Working Group (an organization in the US devoted to protecting kiddos from all the icky toxic chemicals in our food, water, air, and consumer products), we can reduce our pesticide exposure by 80% by avoiding the most contaminated fruits and veggies and eating only the cleanest.

But just what should we avoid? And which are the cleanest? Since 1995, the EWG has been publishing their guide to the “dirty dozen” of the most pesticide-contaminated foods.  They also have a “clean fifteen” list of foods we can generally get away with without going the organic route.  And the new list is out. Click here for the two lists in a handy little cut-out you can keep with your grocery list.

Fortunately, we have lots of great markets here in Hong Kong – Oliver’s, 360, City’Super…
But we also have a number of great delivery services that will bring fresh organic produce right to your door.

My fave is Aussie Organics.  They offer Fruit & Veg Value Packs that change each week based what is in season. Their Large Mixed Pack contains fruit and veggies for a week for a family of four; the Medium Mixed Pack is the perfect size for a couple.  And if you absolutely can not stand beets and want to ensure that they will never, ever, ever appear in your pack – no prob.  You can make your own Tailored Fruit and Veg Pack by selecting exactly what you want.  And to our friends in Singapore – they deliver there as well!

Read on for more about this year’s Dirty Dozen and Clean Fifteen. 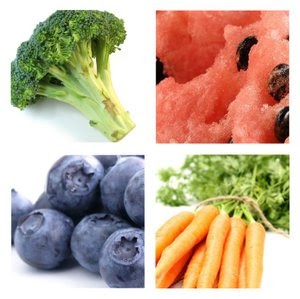 The Dirty Dozen – The 12 Foods to Buy Organic if you can:

1. Celery – Celery has no protective skin, which makes it almost impossible to wash off the chemicals that are used on crops.
2. Peaches – Multiple pesticides are regularly applied to these delicately-skinned fruits in conventional orchards.
3. Strawberries -If you buy strawberries, especially out of season, they’re most likely imported from countries that have less-stringent regulations for pesticide use.
4. Apples – Like peaches, apples are typically grown with poisons to kill a variety of pests, from fungi to insects. Peeling (which strips away much of the good stuff) and scrubbing doesn’t eliminate chemical residue completely, so it’s best to buy organic when it comes to apples.
5. Blueberries – New on the Dirty Dozen list in 2010, blueberries are treated with as many as 50 pesticides, making them one of the dirtiest berries on the market.
6. Nectarines – With over 30 pesticides commonly found on nectarines, they rank up there with apples and peaches among the dirtiest tree fruit.
7. Bell peppers – Peppers have thin skins that don’t offer much of a barrier to pesticides.
8. Spinach – New on the list for 2010, spinach is one of the most contaminated green leafy vegetables around.
9. Kale – Kale is known as a hardier veggie that rarely suffers from pests and disease, but this year tests found loads of icky chemicals.
10. Cherries – You might be surprised that U.S. cherries were found to have three times more pesticide residue then imported cherries.
11. Potatoes – The good ol’ spud can be laced with as many a 37 different pesticides….oy.
12. Grapes – It’s to believe, but the innocent looking little grape can have more than 30 different pesticides.

The Clean Fifteen – The 15 Foods that generally have the least pesticides after washing – whether or not they’re certified organic:

1. Onion – Onions don’t see as many pest threats, which means less pesticide spraying.
2. Avocado -Avocados have thick skins that protect the fruit from pesticide build-up.
3. Sweet Corn – Sweet corn may take a lot of fertilizer to grow, but you’re unlikely to end up with any pesticides on the kernels.
4. Pineapple – You won’t be eating the tough pineapple skin, which protects the fruit from pesticide residue. As with all  produce, though, you should rinse the pineapple before cutting.
5. Mango – My absolute favorite fruit in all the land – and it’s protected by its thick skin.  But you’ll still want to give it a rinse before cutting open.
6. Asparagus – Asparagus face fewer threats from pests such as insects or disease, so fewer pesticides are needed.
7. Sweet Peas – Gotta love the pod – it’s the perfect protection from pesticides.
8. Kiwi – The Kiwi peel provides a barrier from pesticides. But remember to give ‘em  a rinse before cutting.
9. Cabbage – Cabbage doesn’t hold on to so many pesticides because a ton of spraying isn’t required to grow it.
10. Eggplant – Due to its thick skin, eggplants are among the least likely to be contaminated by pesticides.
11. Papaya – Pesticide residue stays on papaya skin, but a good scrub does the trick.
12. Watermelon – The super thick rind is the perfect defense shield against all the nasties out there.
13. Broccoli – These crops face fewer pests – so less spraying is required.
14. Tomato – Tomatoes were on the 2008 Dirty Dozen list, but the latest update finds them cleaner than most. Why? No one is quite sure!
15. Sweet Potato – Not only are sweet potatoes unlikely to be contaminated with yucky pesticides, they’re also packed with Vitamin A and beta caroten.

Breakfast In Hong Kong: Family-Friendly Breakfast Spots Across The City