Don’t want to shell out for a lavish birthday party but need to find a way to entertain the kids? These classic birthday party games will keep ’em occupied!

Hosting a birthday party can be so stressful, but it doesn’t have to be! We’ve put our heads together and picked our all-time favourite, top 13 birthday party games to keep little ones entertained. Many of these are simple enough that kids as young as two can grasp the rules. We also have games for slightly older kids (well, at least until they are young enough to let us be involved in their parties!). You can always check YouTube or Pinterest for all manner of variations on these games, but we’ve laid out the basics. Just add cupcakes and punch, and you’re good to go!

Read more: How Not To Get Caught In The Parent Trap Of Children’s Parties Hot potato is one game sure to leave all of your party guests in fits of giggles! To play this game, you just need a ball (or any object that you can throw and catch) and some music. It’s suitable for kids as young as three and you only need four or more people to play. Whilst the music plays in the background, toss the object to one another as quickly as you can (because of course, it’s a hot potato!) and when the music stops whoever is holding the object is out of the game. To ramp up the fun, you can use a real potato or a wet sponge – that’s sure to entertain the little ones!

This game can be played by 1-year-olds and up (even if they need help counting), but you must have three or more players. One child or adult is chosen to be Mr Wolf, and stands at one end of the space you are in. All of the other players stand in a line at the other end of the area. Mr Wolf then has his (or her!) back turned to everyone else. Everybody calls out, “What’s the time Mr Wolf?” and Mr Wolf calls out a time, say, “It’s 4 o’clock!”. The children then take those many steps (four, in this case) forward. This is repeated until Mr Wolf feels the children getting close and shouts out “dinnertime!”. Mr Wolf chases the other children until he catches one and they become the next Mr Wolf. Kids love this game and the suspense builds up gradually when they are waiting for it to be dinnertime. Expect lots of screaming with delight and mock horror!

Toddlers LOVE this one. Start with a line of chairs set up alternating in direction for as many kids as there are at the party. Play music and encourage them to slowly walk around the chairs. When the music stops, everyone has to find a seat. Remove one chair from the end, then play the music again, so that when it next stops, someone won’t be able to grab a seat. That person is then “out”. One by one, keep eliminating seats until you’re left with a winner. There are plenty of variations of this, from Musical Hands (linking arms with a partner) to Musical Tiles (finding a free floor tile to stand on).

For slightly older kids (4 to 7 years) Simon Says is a classic oldie children’s game that you might have learnt in the at school. It’s fairly simple and easy for young children to follow. You can play this game pretty much anywhere and the amount of space you need depends on how many children are taking part. You need to pick someone to be the leader (Simon), this person stands at the front with all of the other players facing them. “Simon” calls out actions for everybody to follow like “touch your nose”, but the aim is to only copy what the leader does if they say “Simon Says” before doing the action. If they do not and the other players copy, they will be out of the game. This is a fun game where you try to catch the children out by giving silly commands without putting “Simon Says” before it. Giggles guaranteed.

Sit everyone in a circle and appoint someone to remain standing and call out “Blow wind blow!” to which the rest have to reply, “Blow what?”. Then the one standing has to make a conditional statement like “those wearing glasses” or “everyone wearing pink”, and everyone who fits into that category has to stand up and switch seats (giving the initial person standing a chance to steal a seat as well). There will be one person left standing and the process repeats. Kids have to be creative in coming up with the conditions, and work on their quick reaction times!

This is such a fun one for kids from about age four upwards. Sit everyone around in a circle and have one person be “It” and go around the circle tapping people on the head or shoulder one-by-one, and with each tap say “Duck”. At random, choose someone and say “Goose!” The person who has been tapped has to chase the person who is “It” around the circle. If the person who is “It” gets back to their place in the circle, then the “Goose” becomes “It”. If the Goose catches the kid, he or she stays “It”.

Read more: From Birthdays To Weddings: The Best Party Planners In Hong Kong In a scavenger hunt, prepare a list of things to collect and split the kids into teams to go and find them. The race is to find everything on the list. This game can be done inside or outside, making use of things lying around the house like LEGO, socks, marbles and pens, or nature hunts looking for a big leaf, brown leaf and a smooth leaf.

In a treasure hunt, kids usually compete as individuals and look for fun little objects hidden around (such as an Easter Egg hunt), including toys, candy, or anything else in keeping with your party theme. The clues can be fairly straightforward or complicated, depending on the children’s ages.

What’s On The Tray?

Use this memory game to get the kids to concentrate. Lay out five to 10 different items on a tray; for example, a fork, brush, car toy, pencil, hat, banana. Give each child a pencil and paper. Let them look at the tray for a minute, then cover it with a tea towel and get the kids to write down what was on the tray. The one with the most right answers is the winner.

Sweet sucker can get a little competitive, so is strictly for the older kids. All you need is two bowls, one filled with some small round sweets (like M&Ms) and some straws. Split the kids into two or more teams, depending on how many guests you have and then count to three. Children must suck the sweets through the straws and try to transfer them into the empty bowl. You could put a time limit on it to up the ante. 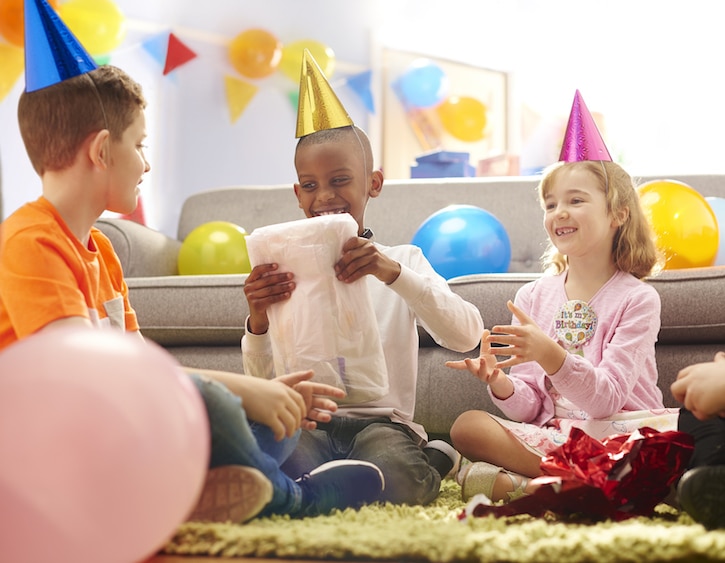 Everyone has played this game at some point or the other! Wrap a little gift in multiple layers of paper (use discarded newspaper or material scraps to be more eco-friendly!). Kids sit down in a circle and pass a present around while music is playing. When the music stops, whoever has the present in their hands removes one layer of wrapping. Whoever unwraps the last layer gets to keep the gift! To make it more challenging for older kids, introduce a task that they have to complete when it is their turn to remove a layer of wrapping (sometimes in return for a tiny reward).

Pin The Tail On The Donkey

Print out a picture of a donkey (or any other animal) and give kids a “tail” attached to a loop of tape. Then blindfold them, spin them around, and watch them attempt to stick the “tail” onto the proper place on the donkey. Kids find the erroneous placements hilarious! For older kids, variations like sticking their own picture onto a map is exciting. We have also played this game at baby showers where trying to attach the baby the bottle leads to a lot of laughs (there’s a hen-do version as well that we can leave to your imagination!).

This is a classic game where one person silently acts out a clue for a partner or teammates. For little kids, it can have a theme like “Animals”, or try something like “Disney movies” for slightly older kids. If you want to be organised, you can print off a page of animal pictures or Disney movies before you start playing. Cut out each individual animal/movie, fold each in half, and put them in a bucket. Begin the game by having the first child choose a piece of paper from the bucket. Chances are that the kids will have so much fun, they will be coming up with their own challenges in no time! The child then needs to act out the animal or Disney movie silently, while the others try to guess what it is. Once guessed correctly, choose another child who has not had a turn.

Relays are a fun way to boost teamwork and get kids hyped up (we’d definitely suggest doing this outside!). You can either set teams up in two lines facing each other, or have single lines and send kids out and back around cones or some other obstacle. Some of our favourite objects to use (to add levels of difficulty as the kids get older) are an egg balancing on a spoon or filled-up water balloons that are prone to pop.

Editor’s note: This post was originally published on 13, February 2019 and updated by Rachel Sadler on 14, February 2020.

Best Cake Stores For Every Special Occasion And Celebration

How To Plan A Baby Shower In Hong Kong

How To Host An Eco-Friendly & Sustainable Birthday Party For Kids

The Sassy Mama Guide To The Best Photographers In Hong Kong